I recently finished painting up 39 Warband miniatures for the Varangur army for Kings of War. The models I picked were Rohan infantry from Games Workshop’s Lord of Rings miniatures line, as they make excellent fantasy Viking- or Saxon-type warriors. I just avoided the color green at all costs!

I multi-based them in 4 elements so that they can be used to represent four Troops, two Regiments, or one Horde in the Kings of War system.

Group shot of the 4 Troop bases arranged to represent a Horde. 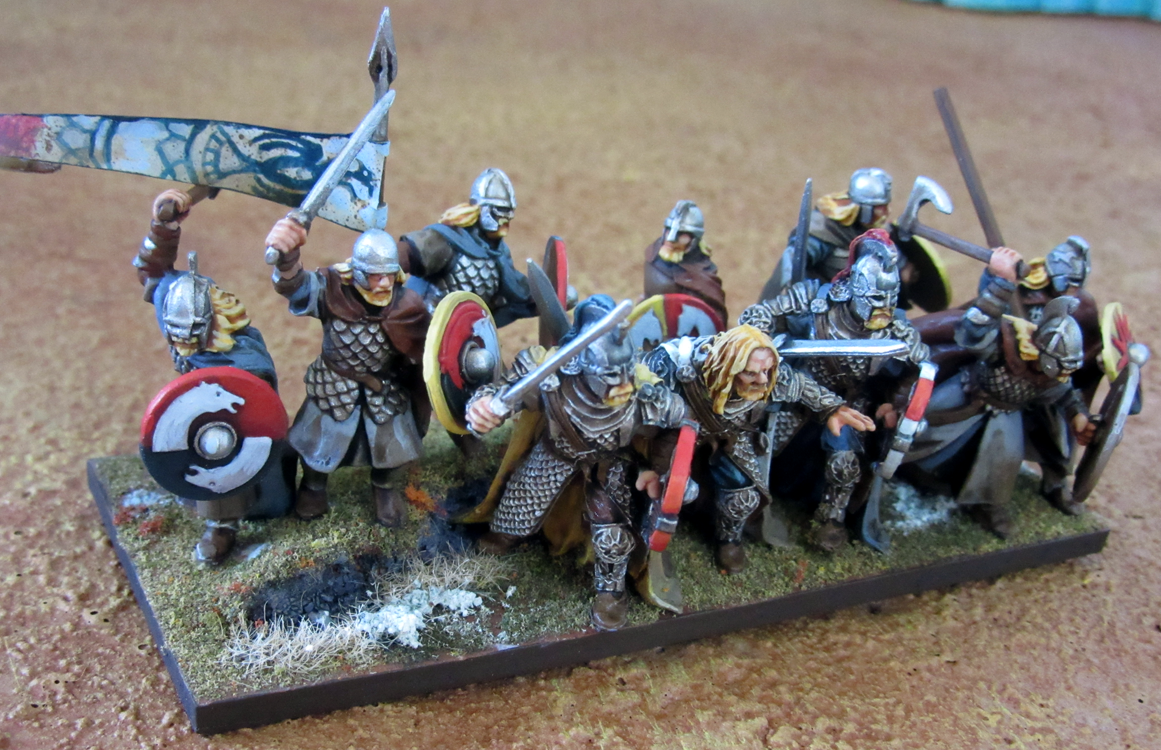 A single Troop base. I didn’t follow the traditional Warhammer route of putting command models front and center in every case, but here the leader is represented by the Gamling character model flanked by two of his richly armored retainers. I liked his cautious, cunning body language so I decided to have him closely guarded going into battle. The Raven banner in the back uses black and white to echo the leader’s clothing and cloak. The spatter painting effect on the banner is an old ‘Eavy Metal technique that was used a lot in the early days of Warhammer. 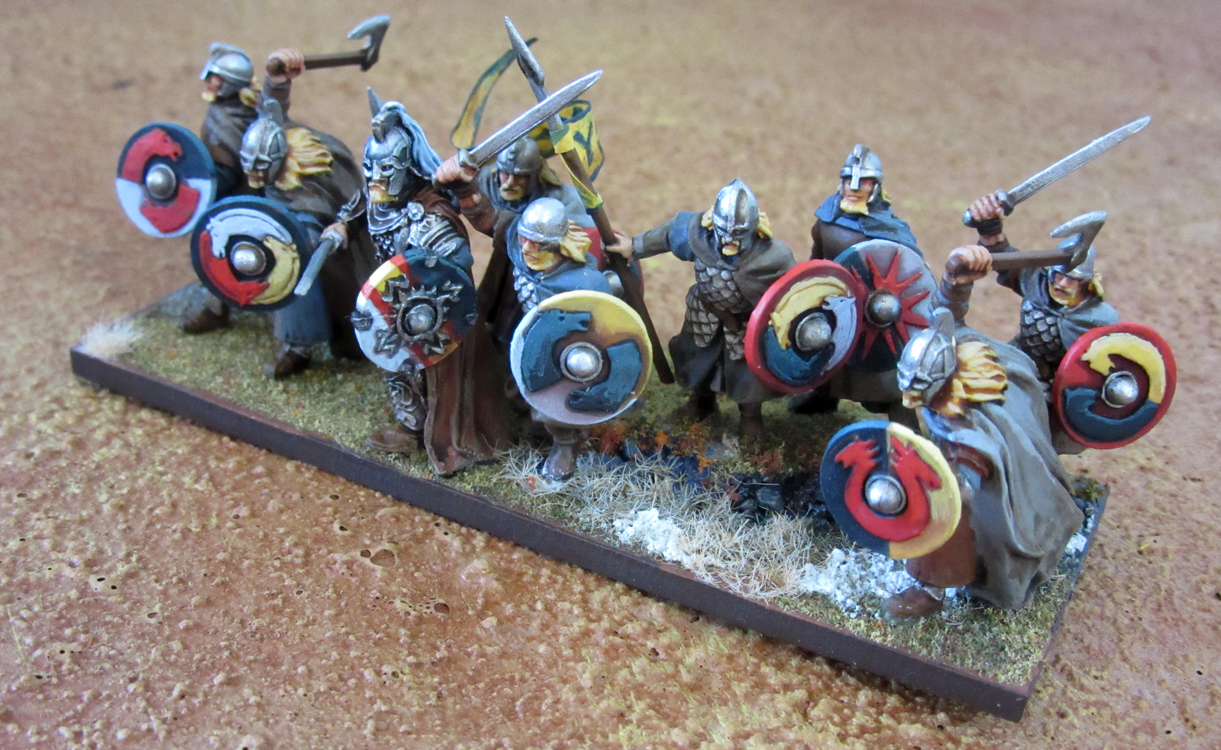 This Troop base is intended to be the rear half of a regiment in many instances, so it’s just got a single Royal Guard model and a banner. In my mind the yellow is more of clan color, whereas red, black, and white (in different combinations) symbolize the three aspects of the god Korgaan. 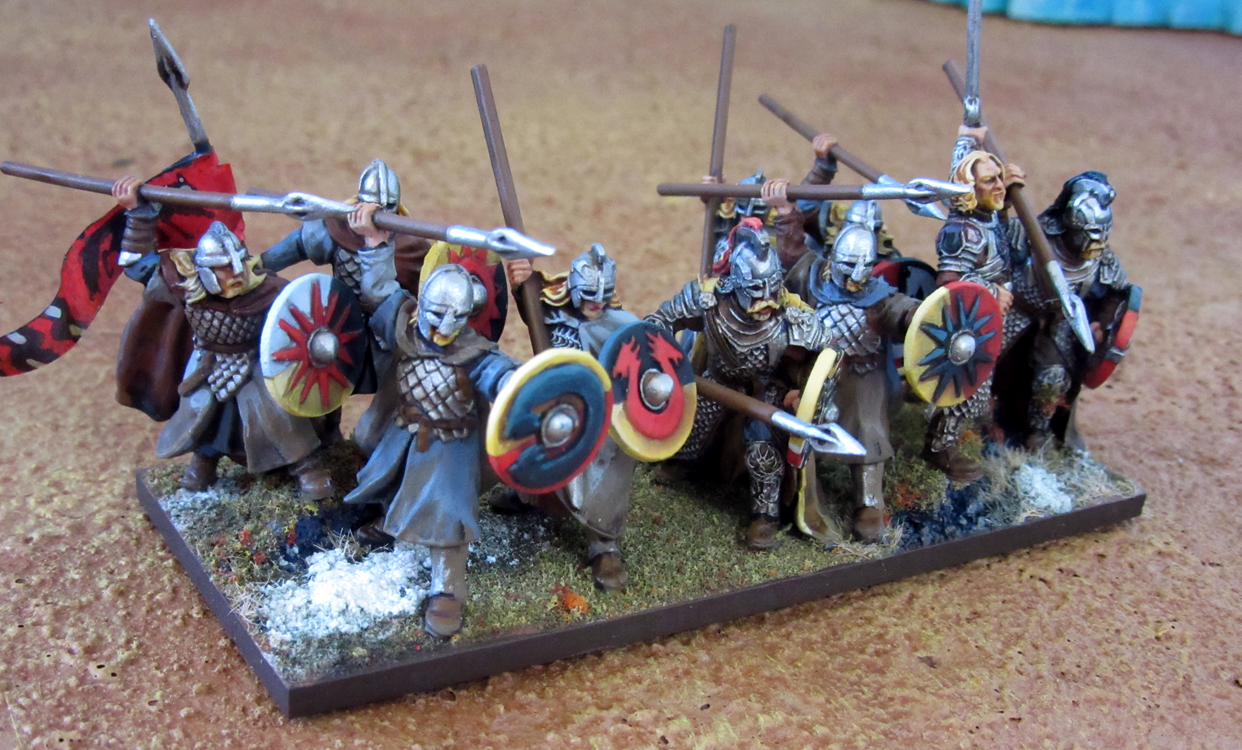 Another “front” multi-base. This time Theoden is the model used for the leader. I put him off-center as I wanted him standing on a small hill I had modeled into the base. Even though Varangur are basically Evil Fantasy Vikings, Theoden is always gonna look pretty heroic, so I didn’t fight it.

You may notice this base is armed with spears. I divided up my models to make two mostly spear-armed bases and two with primarily swords and axes. There is no spear infantry option in the Varangur list, but there is a magic item in the game called Orcsbain’s Amulet of Thorns which gives the Phalanx special rule. This way I can visually represent a unit that’s equipped with that artefact. 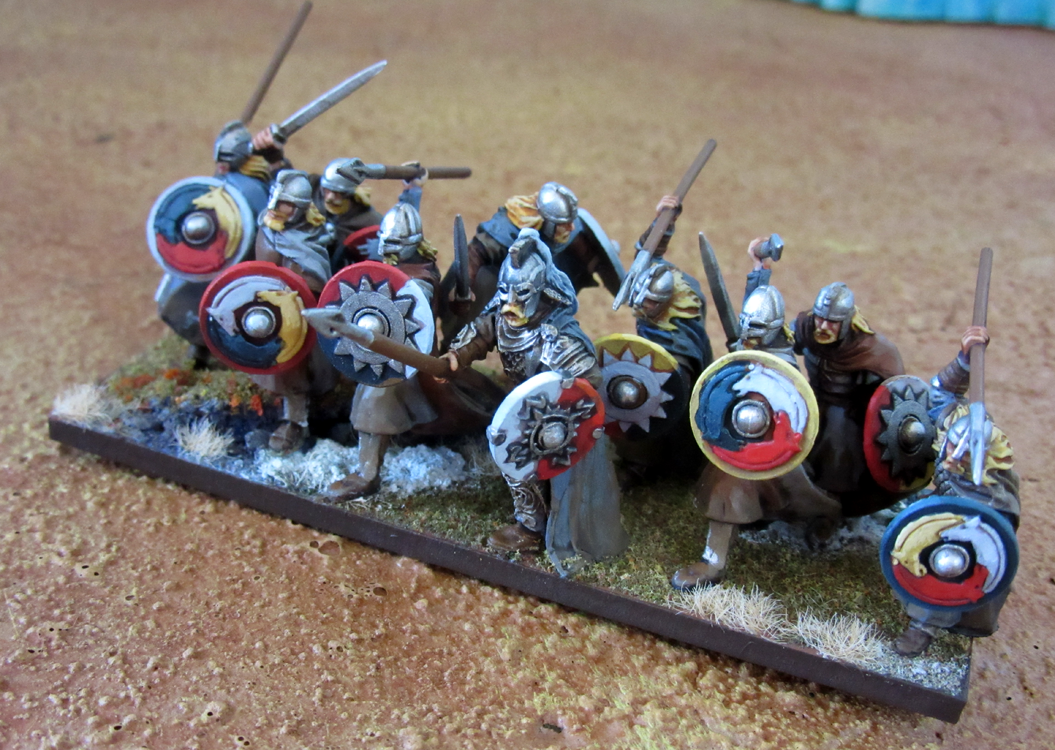 A “back rank” base of mostly spear-armed figures. I ran out of the model holding his spear up so no banner here. 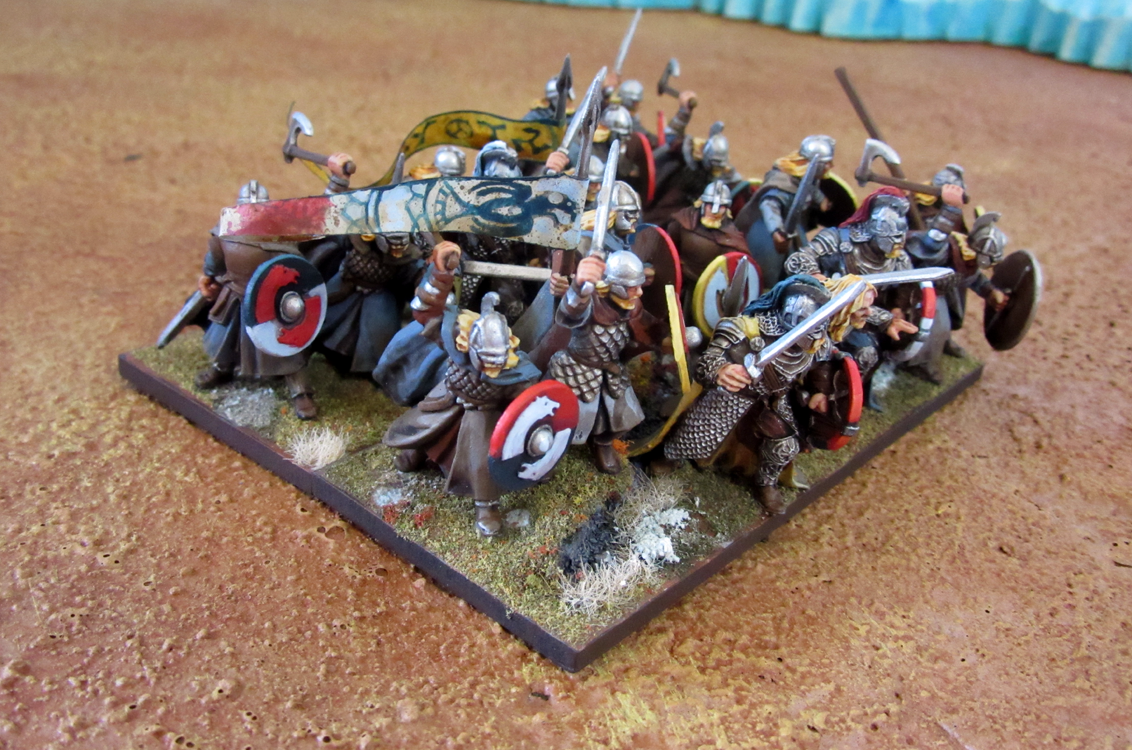 The two “non-spear” bases pushed together to form a Regiment-sized unit. Multi-basing allows units to really resemble a chaotic mass of bodies surging into combat rather than the precise ranks and files of a single-based unit. 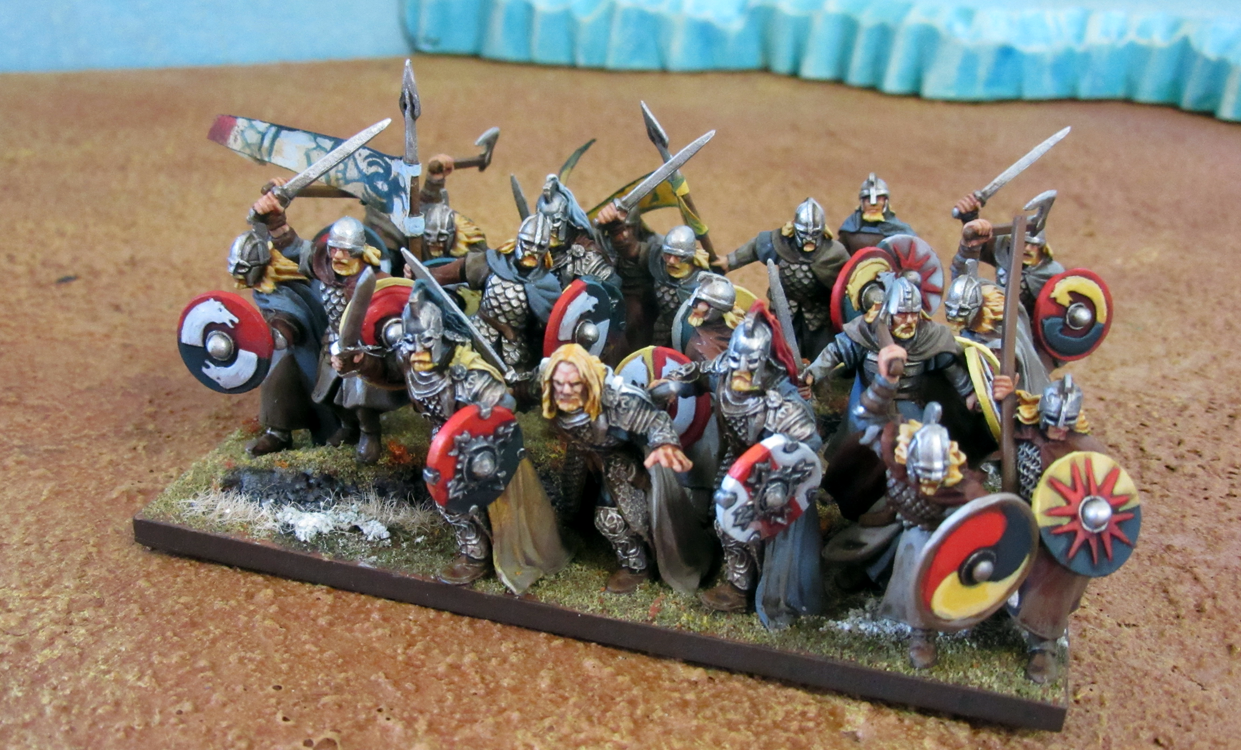 Another view of the same Regiment to show the effect from the front. I occasionally had to turn a model almost 90 degrees to the side to get them to fit in the scrum, but I think it just adds to the ragtag, barbarian look of the Warband. 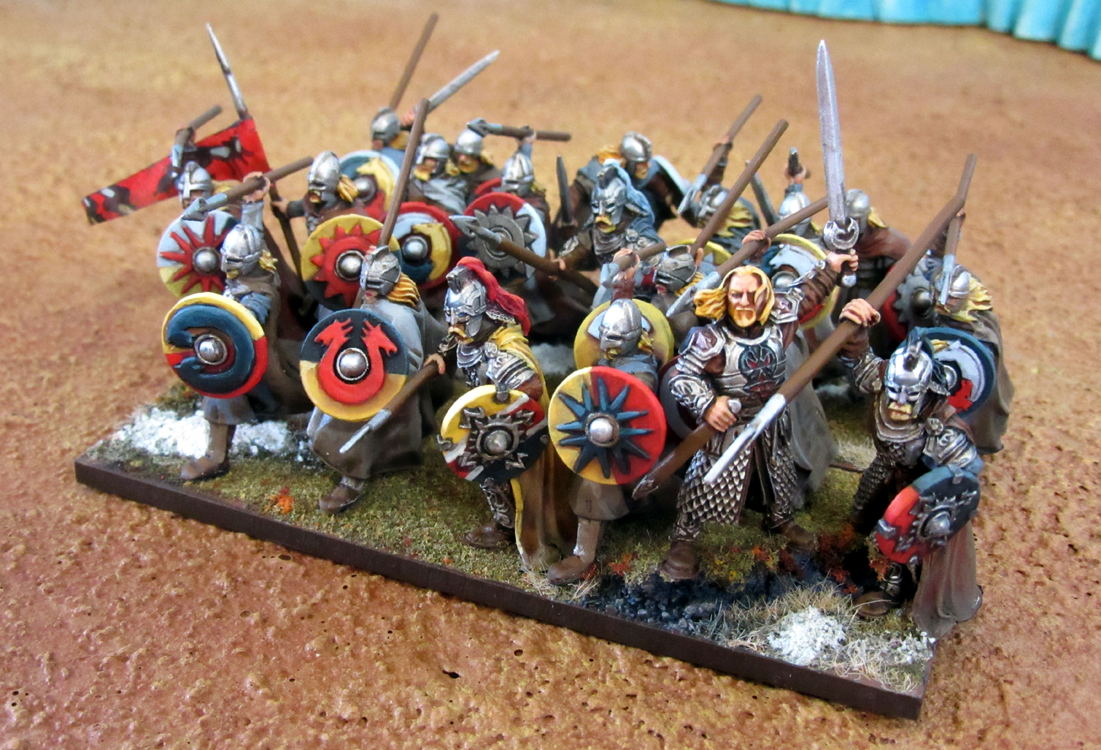 The “spear” bases formed up as a Regiment, led by clan chief Totally Not Theoden. I tried to disguise the horse emblem on his breastplate as an evil skull, at least… 🙂

One more shot of the whole Horde from the front. If I want to give Orcsbain’s Amulet to a different unit in my army I would simply swap the front and back bases to put the non-spear elements in the front rank.